This was a potentially a historic day in the annals of Malaysian history. I was going into the streets of Kuala Lumpur to join the Bersih 2.0 rally .
At 9.00 am I had a missed call from Hassan , a friend from Melaka . I already knew what the call was about . Hassan was already somewhere  in the street of Kuala Lumpur , waiting for me to link up with him . He came all the way down from Melaka by train this morning .

Then I called another friend , Habib , enquiring of his whereabouts . He told me he was having  breakfast in Jalan Pudu  , having put up a night in a hotel  on Jalan Pudu with several of his friends. He entered KL a day earlier to escape the police roadblocks around KL .

As for me , at 10.30 am , I was going to board the LRT train at Sri Rampai station , a ten minutes drive from my home in Bkt Antarabangsa. My destination the Pasar Seni station in the heart of KL

10.40 The train departed from Sri Rampai station . I was travelling alone. The train was not packed with passengers as normally the case on Saturdays . I looked at the other passengers , trying to read from their faces whether they too , were going to the Bersih 2.0 rally. Their faces were mostly blank. Nobody wanted to give anything away.

11.20 I arrived at Pasar Seni station . I saw mainly youths ,  some standing and some sitting outside the station . Most of them carried bags , strapped to their backs. By the look , these guys were definitely lingering up for the bersih 2.0 rally to start.

I walked a short distance to the famous Petaling Street .  Only a few stalls were open . Businesses were mostly closed for the day , I guessed due to Bersih 2.0 .

Already I could see people mostly the young streaming in , the majority of them were Chinese ,  initially in small  numbers.

I met up with Hassan in who came with his wife and sister in law at Petaling St . Remember he came all the way from Melaka. 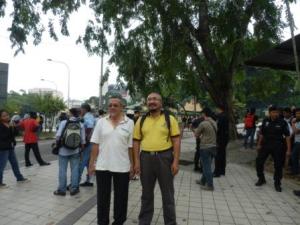 My Friend Hassan (in yellow shirt)

I saw a man selling shirts for RM 10 each . One in particular caught my eye. So I bought one , a yellow Selangor Football shirt . After buying it ,I immediately tucked it into Hassan’s bag for safe keeping , because I didn’t want the police to find me in possession of a yellow shirt much less wearing it  . What about Hassan in possession of my yellow shirt? Will it do any harm to him? No harm done , since he already wore one  . Besides he was a veteran Bersih 1.0 .

The streets were mainly empty , no traffic at all  because all roads leading to Stadium Merdeka were closed by the police. By around 12.00 pm even the LRT stations were closed from KLCC to KL Central , so I heard from Hassan who spoke to a friend on the phone.

By this time the police were already out in numbers . Practically every street corner had  police with trucks stationed at it  .

I thought this must be the safest day in KL  ever because of the huge police presence. 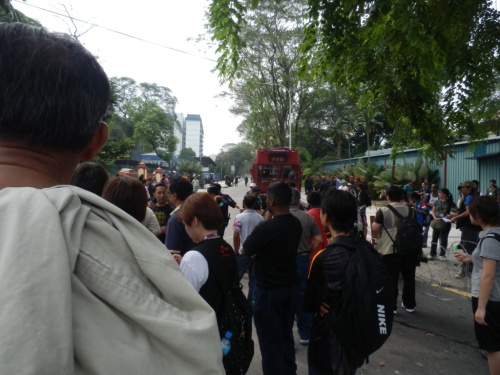 By the look of things , there was no way a rally or a protest march could take place here , today. The Merdeka stadium where the Bersih rally was supposed to take place, was virtually sealed off. All entry points were closed off like the one in the pic above. I milled around with a crowd of 100 people or so at the  police barricade , not really knowing exactly where to go from here.

1.30 pm . The muazzin called for Zohr prayer . I walked a short distance to the Masjid Negara . To my surprise the masjid was closed by the police , who stood at the entrance and prevented everybody from entering the compound. I somehow managed to sneak into the mosque . But others had to perform their zohr prayer outside the mosque.

Soon there was a heavy rain which lasted for half an hour or so. I stayed under the overpass until the rain stopped , then went back in the direction of Petaling Street.

3.00 pm . I joined a crowd of  hundreds marching on Jalan Hang Kasturi  singing the national anthem , close to Klang Bus Stand  and LRT Pasar Seni station. Our march was halted by the FRUs shelling tear gas cannisters at us from a distance of more than a hundred metres. I had to run for cover but in the process inhaled some gas , felt the sting of tear gas in my eyes . I felt suffocated for a minute or two . I recovered quickly after taking a pinch of salt in mouth . The salt cure was amazing. By this time I was already separated from Hassan .

In the melee , nobody among the marchers were hurt save for teary eyes and mild suffocation . I managed to record a video footage of the action on my little camera. That was done while trying to dodge the tear gas bombs. You can watch the video below.

4.00 pm. I decided I could not stick around the area anymore. So I tried to find  my way home. My first destination was to Masjid Jamek LRT station . When I got there I found it was closed . I crossed the road to Masjid Jami’ for my Asr prayer but its gates were   locked.

Then I walked to Dang Wangi station , only to find that it was also closed . I continued all the way to KLCC . Along the way I could see that several FRUs were still standing guard at the intersection of Jln PRamlee-Jln Pinang , and the red FRU trucks lining the street . I also saw several FRUs on horsebacks close to KLCC. Red helmets, blue uniforms, on horsebacks .What a  sight.

Finally I got to KLCC  at around 5.30 pm . I was told that the LRT station was closed and it won’t be open until 6.00 pm . I made my way to KLCC Mosque and  found it open .Finally. And  Alhamdulillah. 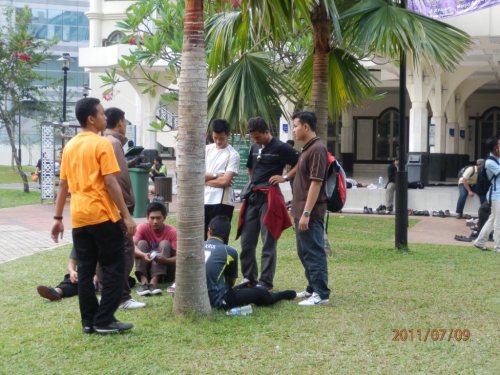 Calm after the storm at KLCC Mosque 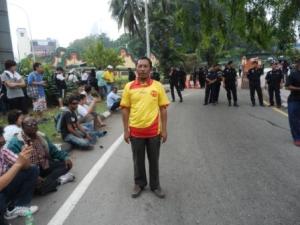 p.s: That was me in Selangor yellow (and red) jersey

Finally at 6.30 pm , I took a LRT train back to Sri Rampai and reached home at half past seven , all in one piece much to the relief of my wife and children.Alhamdulillah . But what a day that was. The day certainly  belonged to BERSIH 2.0

This entry was posted in Travel & Places and tagged bersih 2.0, kuala lumpur, malaysia. Bookmark the permalink.